Keeping the computer out of your way

I think it’s safe to say that almost everyone uses a computer in some way these days to produce music.  And 100% of music touches a computer at some point or another for distribution and download.  Lots of material today is in the computer from the moment the first note is played!  It’s easy to place the blame of today’s less-than-ideal music industry on computers and how they affect us, but let’s take a look at what’s really going on here.

Let’s face it.  Computers are great at one thing: Math.  They are to math what cheese is to nachos.  They are the ruling champions and will always be good at that one thing.  Just that one thing.  A computer will never create music (ok, technically the EMI project (http://artsites.ucsc.edu/faculty/cope/experiments.htm) leaves that an open-ended statement but for the sake of argument, I’ll gloss over that) and a computer will never make the same musical choices you or I would. That being said, computers are taking over the music industry and if you want to make it in today’s world of audio, you need to know how to use a computer and run a few different DAWs.  So how do we bring this lifeless chunk of silicon into our analog world of pressure waves moving through the air and bouncing off our eardrums producing what we call music?

Obviously, people have spent countless hours developing programs that allow us to record and manipulate audio, visualize audio and render audio in a myriad of different formats.  Software like Pro Tools has been around for years now and technology has come so far that what we can accomplish is genuinely astronomical, and yet, just minutes before writing this I found myself pulling my hair out while fighting with a program that’s supposed to be bringing the sounds that I hear in my head, out of my speakers.  Oh yeah, and I paid a lot of money to get said software and a computer to run it all.  It’s so far from nurturing a creative atmosphere that’s it’s basically a sponge of all original thought and I’m ready to burn it.  I’m not going to delve into what OS I’m using, what CPU or what speed it’s clocking at because those numbers are irrelevant.  Everyone (and I mean EVERYONE) has computer issues so it clearly isn’t a matter of just owning the best there is.  The point is, how do I continue to use a computer while forcing it to all but disappear from thought to let me work the way I need to?

First off, I think putting the computer in another room is a big help, but this is instantly overcome by the fact that I have a keyboard and mouse in front of me all the times.  So much for the disconnect!  Many studios have the computer and paraphernalia off to one side of the console, so you have to physically move from the mix position to make edits.  I like this arrangement, it allows you to sit at the console and make changes with your ears, not with your eyes. 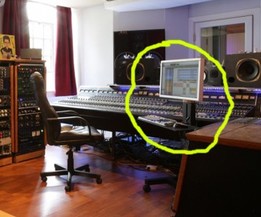 Notice the ProTools on wheels?!?

Plus, in a tracking situation, you don’t have a computer screen between you and the band.  However, for someone like me who only has a 16 channel analog board and limited outboard gear, I do 99.9% of my mixes in the box and it just wouldn’t make sense for me to work this way.  When I use a control surface, I still turn off the screen from time to time, I find this helps.

Finding a DAW that works the way you do is important.  You’ll find workflow much easier if you use software that’s intuitive to you, but the other side of that coin is training yourself to think/work the way the software wants you to.  While I’m philosophically opposed to this kind of programming, it’s exactly what I did with the clunky Pro Tools.  Now that I think “only Avid thoughts” I find PT a pleasure and it rarely stands in the way.

But the fact of the matter is, day in and day out, I find myself hating the computer.  It’s never reliable and sometimes it costs me more in lost time than I care to admit.  So just keep in mind that the computer is just a tool, and like any tape deck it needs TLC and if you can ignore the tufts of hair you are guaranteed to loose during operation, you will be able to take advantage of all the great things offered by binary math boxes.  So the takeaway here is, try to develop the skills to let the computer take a backseat to creation, make sure to keep the computer running as happily as you can, and most importantly, learn to use it only to make your music better.  If it doesn’t nurture your work, don’t bother buying it, and finally remember that everyone deals with the same issues as you.