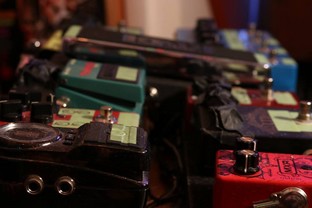 Let’s be honest. One of the perks of being an electric guitar player is getting to play with the thousands of cool guitar pedals out there.

To me, it’s like candy. Except the candy is a pallet of inspiring sounds!

Granted, my setup is ever changing, but here’s a little rundown of where things are now: 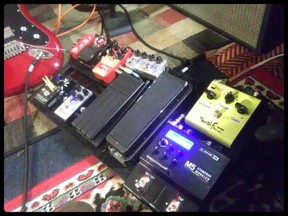 First in the loop is a fuzz. This regularly rotates between my two favs, the Voodoo Labs SuperFuzz, and they crazy-inexpensive-yet-amazing Seymour Duncan Tweak Fuzz. In my mind, fuzzes always like to be first, so there it is. (there’s other reasons for this being first too, check out my other blog here)

The other pedal that loves being fist is the wah, but when push came to shove, the wah took second place. I use an old Jimi Hendrix model Dunlop wah, it just sounds like it’s supposed to.

Next we hit the dirt section. Right now I’m hitting a zVex Box Of Rock, and then a Hermida ZenDrive. The BOR is great for transparent gritty distortion (plus the boost is a great little feature) and the Zendrive is a very mid-heavy overdrive. Great for thickening up leads.

After dirt-world, we get into the crazy stuff. First, my generic “kick me on for a solo” delay is the good old EHX Carbon Copy. With modulation, of course. Then it hits a Line6 M5 which splits the signal into stereo, and heads to a TC Hall Of Fame reverb pedal. (unless I use two amps, the signal is mono)

The M5 is really nice for having a bunch of miscellaneous stuff at your toes for a last-minute effect. I use it for tremolo, chorus, flange, synth sounds, etc. Because I don’t have room on my board for a tremolo, a chorus, a flange, a synth etc 🙂 They certainly aren’t the best sounds available, but they get the job done in a pinch. Great for live use!

The TC HOF is amazing. I use 3 settings. There is a really nice spring (good for those amps with no verb built-in) I use the Hall setting for generous BIG lead sounds, and there’s a toneprint I downloaded that adds a nice chorus to the reverb trails and is very luscious.

After that I hit a tuner, and an A/B pedal that switched between the two channels of my Fender Deluxe Reverb.  Be sure to check out my amp blog for info on that.